Announcing IPSEC IKEv2 and Always-On VPN for IOS and Mac

Home/Announcement, Network/Announcing IPSEC IKEv2 and Always-On VPN for IOS and Mac
Previous Next

Announcing IPSEC IKEv2 and Always-On VPN for IOS and Mac

We are thrilled to announce IKEv2 VPN and Always-On VPN for iPhone, iPad and Mac. IKEv2 is considered much more modern and secure than previous older VPN standards such as IPSec, L2TP, and PPTP.

Support for IOS and Mac is in addition to Windows, Android, Linux, Windows Phone, BlackBerry, etc. Installation guides will be up in a few days. Send us an email for early access.

We use a combination of certificate and username / password for enhanced security.

What it means to you?

Faster speeds, highly secure and efficient use of resources. IKEv2 is part of Suite B cryptography and is used by many corporations and governments for secure remote access and data transmission.

What is Always On VPN?

Rather than relying on users to initiate VPN connection, the always-on VPN starts automatically as soon as computer or device detects Internet connection. This setting will ensure you are always on the VPN.

All our servers support IKEv2. For list of locations, visit VPN locations.

IKEv2 is natively supported on iPhone, iPad, Mac, Windows, etc. No need to install any closed source or poorly written apps that drain battery, steals bandwidth or compromises your security and privacy instead of protecting. 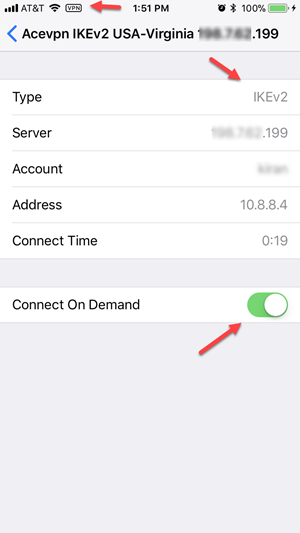